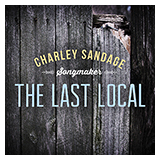 Falling squarely into the Americana category, and mostly acoustic, “The Last Local” features a new selection of my original songs and the instrumental work of the inimitable Tim Crouch, from nearby Strawberry, Arkansas, who played fiddle and did the charts for Alan Jackson’s recent bluegrass album. Some of the songs were written decades ago, and some are only months old. Casey Penn contributed harmonies, and Brad Apple recorded and mixed the final stages. Three are co-writes, one each with Robert Rivers, Doug Deforest, and Connie Mims. They are songs of celebration, storytelling, recollection, and reflection.